‘The other thing one must consider is the illegality of the art form. For years this geezer has been wanted by various authorities for the prescient act of daubing on walls. He is well aware of what the authorities would like to do with him – set an example and all that. By prescient I mean that what you see on a wall boldly painted by someone often projects into the future; it’s powerfull and effective – and the status quo doesn’t like it. They never have and they never will, because they can’t control it. But if you can pay through the nose for a billboard, you can say virtually anything you like. And as citizens we all have to swallow the messages of envy and greed from our ‘friendly’ corporations because they have created laws saying that kind of indoctrination is OK. It’s been paid for. And every graffiti artist I have ever known, including myself, understands that. Adverts are as far from the truth as it possible to get. They represent the utopia that you must pay for as you slope through your trashy end of town without a penny to scratch your arse with. But to go out there in the dead of night even the dogs are asleep and to put on a wall a picture of the way you, as a free citizen, see this whole set-up is to have the courage of your convictions so the general public can witness how you see it, for free. And we all know graffiti can be exquisitely poignant and beautiful, more than any advertiser can co-opt or come up with. As long as there advertising billboards there will be graffiti and there is no contest as to which is the more creative and true. So forget having a clean-walled town for the foreseeable future.’
[Robert Clarke, Seven years with Banksy, p.10-11.] 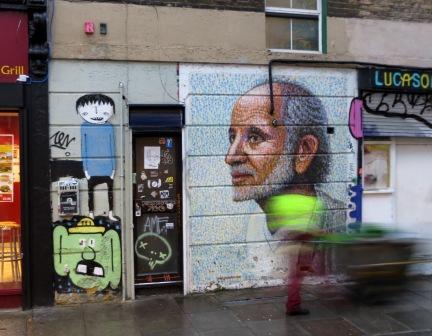